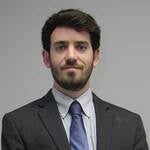 William Brierre was born in Birmingham, Alabama and raised in Lafayette, Louisiana. He received his Bachelor of Arts from Louisiana State University with a double major in English- Creative Writing and Film & Media Arts in 2014. He earned his Juris Doctorate in 2018 from Loyola University New Orleans College of Law. During his time in law school, William clerked for Babovich & Spedale, PLC, served as an extern for the Honorable Judge Jay C. Zainey in the United States District Court for the Eastern District of Louisiana, and was a student practitioner in the Criminal Defense Clinic at Loyola's Stuart H. Smith Law Clinic and Center for Social Justice. William also served as a national coach for Loyola's Trial Advocacy Program and participated in several competitions on the program's national team at the John L. Costello National Criminal Law Trial Advocacy Competition in Fairfax, Virginia. He was admitted to the Louisiana Bar in 2018 and is admitted to practice in the United States District Court for the Eastern District of Louisiana. Additionally, William studied internationally attending the Humboldt University of Berlin, Germany, where he studied Intercultural Negotiation, Mediation, and Arbitration. There, he earned enough credit to become a certified mediator in the State of Louisiana.